Those seeking truths about President Kennedy’s assassination and who otherwise honor his memory are urged to reconvene on his birthday on May 29 at the Kennedy Center for the Performing Arts in Washington, DC. 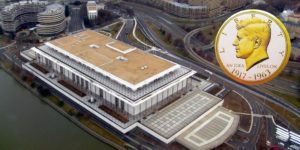 This month’s bi-annual vigil — held also during recent years on the Kennedy Center’s public north terrace each Nov. 22 — will be special. This year is the 100th anniversary of Kennedy’s birth. More formal programs celebrate the occasion in a variety of locales, including the Kennedy Center and the JFK Library in Boston, as described below.

Vigil organizer Karl Golovin, a retired Special Agent of the U.S. Customs Service who advocates for more public education about the JFK assassination, urges others to join him at the vigil, which begins at noon and is entitled, “Peaceably Assemble for Truth: From JFK to 9/11.”

“Without signs, speeches or entertainment,” is the way that he describes the format. “Simply wear a “JFK Button” (provided free to all attending), in petition by your presence for Truth: JFK to 9/11.”

Golovin (shown in a file photo) retired in 2007 from the Customs Service, by then known as the Department of Homeland Security’s Immigration and Customs Enforcement (ICE).

Organizer Karl Golovin has acquired 30 tickets to provide as gifts for the first 30 participants who both arrive on time (at noon) and continue in this “JFK Vigil” for the full three hours, until 3 p.m. to join in a “group photo” — wearing our “JFK Buttons”— before going inside to enjoy the “JFK Centennial Celebration.” 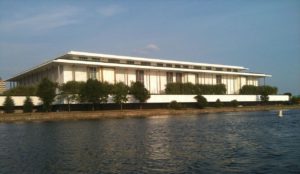 The Kennedy Center and Potomac River in Washington, DC are illustrated by photos via Wikimedia

after the birth of one of our nation’s most visionary and inspiring presidents, the “living memorial” created in his honor pays loving tribute to the galvanizing spirit of President John F. Kennedy. In this special program, artists and audience members — from those whose lives he touched to younger people yet to discover his legacy —will come together to celebrate his words and pioneering vision.

“Be part of an evening of readings and musical performances,” organizers wrote, “featuring some of America’s finest artists, as well as glimpses of rare video footage. Taken together, they will remind us of the enduring power of one man’s imagination and courage, and his unwavering belief in justice and peace for all people. Participating artists and program details to be announced at a later date.”

In Boston, the JFK Presidential Library and Museum will host JFK100: Centennial Celebration. Over Memorial Day weekend, the Kennedy Library will host a series of events and activities highlighting peace, public service, science and innovation. On Monday, May 29, join others for free admission to the Museum, and a cake cutting ceremony to celebrate President Kennedy’s 100th birthday. There’s cake for 1,000 visitors.