Longtime JFK Assassination researcher Bill Kelly and journalist Bill Hughes have published generally positive reviews of the long-awaited memoir by Antonio Veciana, the leader of the anti-Castro death squad Alpha 66 that worked with the CIA to kill the late Cuban leader to overthrow their Communist government.

Kelly (shown in a file photo), a board member and secretary of CAPA, published his review at the research site JFKcountercoup that he edits to explore covert operations that led to the assassination of President John F. Kennedy in 1963. Hughes published at the Los Angeles Post-Examiner. 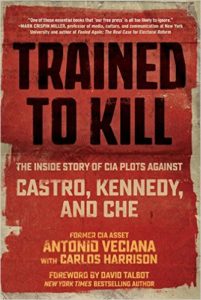 We publish below long excerpts of their reviews, beginning with Kelly’s. The memoir is Trained To Kill:  The Inside Story of CIA Plots Against Castro, Kennedy and Che (Skyhorse Publishing) by Antonio Veciana, with Carlos Harrison and a forward by David Talbot.

After decades of knowing for certain that David Atlee Phillips is the true identity of CIA spymaster “Maurice Bishop” Antonio Veciana finally comes clean and confirms this truth he had previously denied. We knew Phillips was “Maurice Bishop” — as Veciana described him to Congressional investigator Gaeton Fonzi and journalist Dick Russell in the 1970s — by comparing that profile to Phillips’ description of himself in his autobiography Nightwatch: 25 Years of Peculiar Service, as there are over a dozen matches of specific times, places and events that certify his true identity.

These associations cannot be coincidences and serve what Sen. Richard Schweiker (R- Pa.) called the “fingerprints of intelligence.” Schweiker recognized a composite sketch of “Bishop” as David Phillips, someone who had testified before his Intelligence oversight committee. Schweiker (shown in a file photo) had hired Philadelphia investigative journalist Gaeton Fonzi as an investigator for the the Frank Church Intelligence Committee subcommittee (led by Schweiker and Sen. Gary Hart), and Fonzi was subsequently hired by Richard Sprague, the first chief-council to the House Select Committee on Assassinations (HSCA).

Veciana told Fonzi about “Maurice Bishop,” an American intelligence spymaster who recruited Veciana while he was working as a banker in Havana and then directed his anti-Castro activities for over a decade, including a number of failed plots to kill Castro (shown at right).

While these plots are interesting, including one involving a bazooka that led to the arrest of the parents of Sylvia Odio, an important and significant fact that isn’t mentioned by Veciana, what he leaves out indicates that he knows more and this story is not yet fully understood.

Other missing items include the lack of photos, footnotes and an index, things I would have thought Pulitzer Prize winning co-author Carlos Harrison would have insisted on. But as with Peter Janney’s Mary’s Mosaic, they may be included in future editions, as this story has legs and will not die.

As naysayer Tracy Parnell has pointed out and John Newman will explore in the next volume of his multi-part serial Into the Storm, not all of Veciana’s recollections add up, and he’s given different dates for the same event, though such discrepancies are to be expected, especially from an eighty something year old octogenarian recalling things from a half-century ago.

But there is no doubt that Phillips is Bishop, the psychological warrior and CIA spymaster. 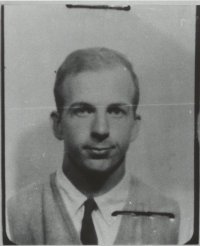 The hook to Veciana’s story is that his intelligence case officer — Bishop/Phillips, introduced him to Lee Harvey Oswald — the accused assassin of President Kennedy in Dallas a few months before the assassination.

The fact that Oswald (shown in a passport photo) was living in New Orleans at the time is used [by critics of Veciana’s memoir] in an attempt to discredit Veciana or make it a case of mistaken identity. Although Oswald’s exact whereabouts at the time are unknown he was attempting to penetrate another anti-Castro group: the DRE. And despite not having a driver’s license he got around pretty good.

They met on the first Saturday in September in the lobby of the Southland Center, the tallest building in Dallas, and a place that Oswald was familiar with, as he had applied for a job there, and it was the location of the Mexican consulate. Phillips (shown below at right in a file photo) was already there talking to Oswald, to whom Veciana was introduced.

But Oswald never said a word. They looked for a coffee shop, and stopped a young couple heading for the observation tower on the roof, and they said there was a diner around the corner, and Oswald left Phillips and Veciana to discuss their work. But after the assassination the girl recognized Oswald, the accused assassin, as one of the three men she encountered, and told her mother, but they never came forward out of fear. Veciana too, recognized Oswald as the man Phillips introduced him to, but didn’t press the issue, never mentioning it again, until he was questioned by Fonzi.

But as with the Odio incident, it matters not at all if it was Oswald or look-a-like or an imposter, or even if Oswald was a shooter or a patsy. Either way these incidents remove the assassination from being the act of a deranged loner and clearly define it as a covert intelligence operation — one planned and conducted by an intelligence agency network.

Trained to Kill: The Inside Story of CIA Plots Against Castro, Kennedy and Che:  I couldn’t help thinking when reading Veciana’s riveting account of his licensed-to-kill days as a CIA asset: Will our country’s bloody past now come back to haunt us as our politics continues to badly splinter the nation?

Our America, via its “Deep State” operatives, has a notorious record of removing foreign leaders, whose politics our elite insiders oppose, by any means necessary, including murder. A case in point was the CIA-orchestrated assassination in 1973, of Chile’s Socialist President, Salvador Allende. The fingerprints of then-President Richard M. Nixon and his alter-ego, Henry Kissinger, are all over that foul deed.

This brings us back to Veciana. He is a native of Cuba, who now resides in Miami, FL. He is 88 years old and in failing health. He insisted that he wrote the book because he no longer feared a Cuban-inspired assassination attempt on himself. Veciana said it was time to reveal “the truth about his double life.”

In his book, written with Carlos Harrison, Veciana (shown in a file photo) recounts his amazing transformation, beginning in 1959, from a mild manner accountant in Havana, to a paid CIA asset, a spy, a wannabe Fidel Castro assassin and a terrorist.

Like many of his fellow Cubans, Veciana opposed the dictator Fulgenico Batista, who came to power in 1952. On January 1, 1959, Batista fled Cuba for Spain. Castro and his supporters then took over.

Veciana then met a man known as “Maurice Bishop.” His real moniker was David Atlee Phillips. He would later become the CIA’s chief of Western Hemisphere operations and Veciana’s handler. For all the failed hit jobs on Castro, Bishop supplied Veciana with the “training, the money, the intelligence and the weapons.” Veciana details all of the assassination attempts in his book. Some of the capers, however, read like a “keystone cop” operation, including the one where they were going to kill Castro with a (double gasp) – “poison pen!”

A failed attempt, in Miami, on Veciana’s life followed. Eventually, both Bishop and Veciana testified, in the late ’70s, before a Select House Committee investigating the JFK assassination. Bishop died in 1988.

The most shocking revelation in this memoir is the author’s claim that he met Lee Harvey Oswald, in a Dallas, Texas, hotel lobby, with Bishop, only days before JFK’s assassination, on November, 22, 1963. If true, it would give credence to Oswald final words, “I’m a patsy” and put the CIA, and Bishop/Phillips, in the center of that crime of the century.

Trained to Kill covers a lot of our country’s darkest chapters. It’s a darn good book, but without corroboration in key parts, its plausibility should be weighted carefully by the discerning reader. Click here for full review.

Review: 5.0 out of 5 stars.  A must read for all Americans, June 20, 2017 by Glenda Devaney: This book is a real eye-opener, written by someone who was in a position to know about his subject matter. As the liaison between the CIA and the pentagon, he had a front row seat to the operations of the government. Because of his position he was able to write knowledgeably about these issues and I learned much from his book. His writing is clear and concise. He knew much about the plot to kill President Kennedy. I have seen his interviews and I believe he is honest and a patriot. For those of you who care about the assassination of Kennedy, there is a group, Citizens Against Political Assassinations, open to the public, that is advocating for the release of all government records which, according to the JFK Act of 1992, are due to be released Oct. 26, 2017.