By Andrew Kreig (CAPA board member, journalist and author) 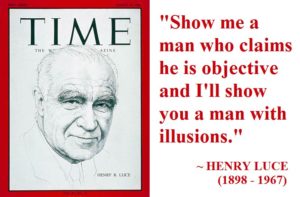 The disputes illustrate the credibility gap of such media as Time and History channel, and their heavily promoted cadres of former CIA and other operatives popularized as experts while scholarly and eye-witness dissenters are virtually ignored.

However, the melange of opinion, news and public relations techniques applied to the Kennedy death are nothing, except perhaps to gullible readers and viewers.

The basic cable network, owned by the Arts and

Entertainment Network as a joint venture between Hearst and the Disney Corp., has been transformed in a “reality show” network (that is fake excitement) from its roots in documentaries and history, as voiced by critics.

The merit of that criticism seems obvious also from Time’s description of the channel’s new JFK series.

Among the disputed assumptions and opinions in the Time article (and apparently in the film series) are the claims parroting the Warren Report that Oswald “acted” alone in shooting at Kennedy. Some dispute that Oswald even shot at JFK or the policeman Tippit (shown at left).

Such disputes, important though they are to historians, are ultimately less significant than the clear-cut evidence that Time Magazine (and such affiliates as Life Magazine and CNN) are among the government-influenced media that have long suppressed vital witness and documentary evidence — and obviously do not want even to mention that controversies exist, much less try to resolve them in good faith.

There exists compelling evidence, for example, that Oswald, a former U.S. Marine who held high-level security clearance while working on the U-2 spy plane project, was a U.S.-government asset later pretending to be a pro-Communist defector to the Soviet Union and, upon return to the United States, advocate for Fidel Castro.

That would suggest that he was a patriotic American working undercover to help kill the Cuban leader. Oswald is shown during his two and a half years of Marine service in an image far different than that provided to this day by the corporate-controlled media.

This evidence suggests also that Oswald was betrayed by his government handlers, who used his undercover 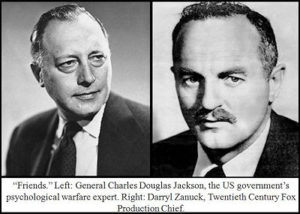 government work to frame him as a patsy for JFK’s killing that was perpetrated by someone firing from a different angle than Oswald’s location.

A compliant media covered up informed discussion of the crime at the outset. Time Publisher Charles Douglas “CD” Jackson, a former White House national security aide and master propagandist whose government and Hollywood connections are portrayed a left.

Undisputed is that Time-Life bought exclusive rights to a film of the shooting by Abraham Zapruder, and then suppressed the film for 12 years except for stills and a limited viewing designed to illustrate a narrative that Oswald was a lone, deranged killer. ABC TV and its then-courageous host Geraldo Rivera broke the embargo in 1975 by broadcasting a stolen copy of the Zapruder film taken by the public-spirited lab technician Robert Groden.

In sum, Time’s fundamental assumptions — that Oswald is proven to have killed JFK and the policeman Tippit, and that the former CIA operative, Baer, is an independent expert willing to expose the agency if needed in order to alert the public to the truth — are dubious at best to many other experts. But Time Magazine appears to accept all of this without question.

Lee Harvey Oswald shot President John F. Kennedy shortly after noon on Nov. 22, 1963, things moved quickly. About an hour later, Oswald fatally shot Dallas police officer J.D. Tippit. Thirty minutes after that, police found Oswald and arrested him. Two days later, on Nov. 24, Jack Ruby shot Oswald (shown in a 1964 Time cover photo just as the Warren Commission report was released). And just a day after the assassination, FBI Director J. Edgar Hoover had already expressed his preliminary finding that Oswald had acted alone. The full Warren Commission report would later back up that finding — but more than a half-century later, polls have found that most Americans are not convinced of that fact.

That’s why former CIA operative Bob Baer launched an investigation into the declassified government files on the case. On his six-part series “JFK Declassified: Tracking Oswald” — debuting Tuesday night on the History channel — Baer attempts to demystify the link between Oswald and Cuban and Soviet operatives. It’s no secret that, for example, Oswald went to a meeting at the Soviet embassy in Mexico eight weeks before he assassinated JFK, or that he tried to defect to the Soviet Union in 1959.

But Baer pursues those leads, and further investigates Oswald’s connections to the Cuban dissident group Alpha 66, which had been infiltrated by Cuban intelligence officials who were reporting their activities back to Fidel Castro’s government. His conclusion is that, while Oswald acted alone when he fired the bullets that killed the President, his connections to Cuban and Soviet officials were deeper than is often assumed.

Ahead of the debut of his series, Baer spoke to Time about why Oswald could have wanted to work with the Soviets and Cubans.