On July 24, 2017 at 8 a.m., the National Archives released a group of documents (the first of several expected releases), along with 17 audio files, previously withheld in accordance with the JFK Assassination Records Collection Act of 1992.

CAPA’s leadership applauds the release of records, including release on a rolling basis to advance research instead of all at once at the statutory deadline of Oct. 26, 2017 for final release.

The National Archives (NARA) announcement of the release follows below:

The materials released today are available online only. Access to the original paper records will occur at a future date.

Download the files online here. Highlights of this release include 17 audio files of interviews of Yuri Nosenko, a KGB officer (shown in a file photo) who defected to the United States in January 1964. Nosenko claimed to have been the officer in

charge of the KGB file on Lee Harvey Oswald during Oswald’s time in the Soviet Union. The interviews were conducted in January, February, and July of 1964.

Background: The re-review of these documents was undertaken in accordance with the John F. Kennedy Assassination Records Collection Act of 1992, which states: “Each assassination record shall be publicly disclosed in full, and available in the Collection no later than the date that is 25 years after the date of enactment of this Act, unless the President certifies, as required by this Act, that continued postponement is made necessary” by specific identifiable harm.

The act mandated that all assassination-related material be housed in a single collection in the National Archives and defined five categories of information that could be withheld from release. The act also established the Assassination Records Review Board to weigh agency decisions to postpone the release of records.

The National Archives established the John F. Kennedy Assassination Records Collection in November 1992, and it consists of approximately five million pages of records. The vast majority of the collection (88 percent) has been open in full and released to the public since the late 1990s. The records at issue are documents previously identified as assassination records but withheld in part or in full. Federal agencies have been re-reviewing their previously withheld records for release, and will appeal to the President if they determine that records require further postponement.

CAPA (Citizens Against Political Assassinations) this spring helped prepare the research community for NARA’s forthcoming release of documents this year by presenting a major forum on March 16 at the National Press Club presenting experts on the topic. 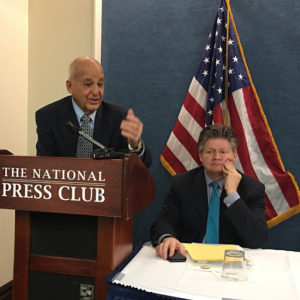 The featured speaker was former Assassination Records Review Board Chairman John R. Tunheim, who had led the five-member commission appointed by Congress to supervise release of documents related to Kennedy’s 1963 assassination.

“CAPA seeks release of the remaining JFK records with a minimum of redactions, which can obscure vital information,” commented Wecht, a prominent expert in forensic pathology for five decades. “We shall also file Freedom of Information Act requests and similar legal actions to enforce the law and undertake public education efforts to show the importance of disclosure to new generations.”

“Those seeking further analysis about the release,” commented JFK Lancer Productions and Publications Co-Founder Debra J. Conway, whose company has produced events, books and films about the JFK assassination since 1995, “should contact CAPA or the Mary Ferrell Foundation.”