following statement in conjunction with a petition by Sirhan Sirhan last week to the Organization of American States (OAS) seeking a new trial or evidentiary hearing on charges that Sirhan acted alone and fired the fatal shot killed U.S. Sen. Robert F. Kennedy in 1968.

Pepper, a friend of the late senator, argued in the petition to the Inter-American Human Rights Council (IACHR), a unit of the OAS, that Sirhan failed to receive effective assistance of counsel.

The petition, which is available here, argues that Sirhan’s original attorney, the late Grant Cooper, was conflicted because of a secret felony indictment against him regarding another case. The petition, reported in this news story, Petition To OAS: Sirhan wrongfully convicted in 1968 RFK Murder, also argues that Cooper should have defended Sirhan (shown at right last year in a California prisons photo) by challenging the government’s evidence on many scientific, eyewitness and other grounds.

Sirhan’s current attorney concedes that his client Sirhan, now aged 74 and last year rejected for parole for the 15th time, fired shots at RFK from the senator’s front. But Pepper cites evidence that Sirhan did so only because he had been brainwashed by others to serve as an unwitting patsy while the real killer shot RFK from behind at close range and escaped.

I strongly endorse and support the petition that Attorney William Pepper is submitting to the Organization of American States seeking a new trial for Sirhan Sirhan, who was convicted for the 1968 killing of Senator Robert F. Kennedy.

As an official consultant in forensic pathology to Dr. Thomas Noguchi [shown at left], the Los Angeles Chief Medical Examiner who performed the autopsy on Senator Kennedy, I had the opportunity to visit the shooting scene at the Ambassador Hotel and subsequently review and analyze all the relevant forensic scientific evidence and investigative findings in this matter.

Based upon all the objective, indisputable physical and forensic evidence, there can be no doubt that Sirhan did not fire the bullet that caused Senator Kennedy’s death.  That shot was proven to have been fired from a distance of approximately one to one and a half inches from Kennedy’s head with a forward trajectory.  None of the eye-witnesses ever placed Sirhan in such a position as to have been able to fire that shot.  (The official published post-mortem protocol unequivocally sets forth these facts.)

Incredibly, these unchallenged forensic findings were never elicited at trial.  For whatever reason, Sirhan’s defense attorney, Grant Cooper, never retained forensic pathology and criminalist-ballistics experts to present these scientific facts, nor did he ever ask Dr. Noguchi about these findings in his cross-examination.

Various physical investigative findings, eye-witness statements, and acoustics analyses have further buttressed and corroborated the fact that a second shooter was responsible for Senator Kennedy’s death.

The truth regarding the murder of Senator Robert F. Kennedy needs to be uncovered, and justice for Sirhan Sirhan demands to be achieved.

About Citizens Against Political Assassinations (CAPA)

Based in Washington, DC, CAPA is a non-partisan group that researches and reports on suspected political assassinations in the United States and around the world. CAPA is a co-sponsor of the July 20 news conference at the National Press Club featuring Dr. William F. Pepper, attorney for Sirhan B. Sirhan.

Details of the materials provided at the press conference are on the CAPA website (www.capa-us.org), with reporting also by co-sponsors at the Justice Integrity Project (www.justice-integrity.org) and the Europe-based human rights magazine The Indicter (http://theindicter.com and the Asia-based magazine The 5th Estate (http://www.the5thestate.asia/2017/07/forensic-pathologist-dr-cyril-wecht.html). 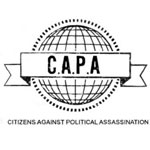