Nearly a score of conference speakers this month presented powerful evidence of a conspiracy to assassinate President John F. Kennedy in 1963 and to maintain a cover-up that exists to the present.

Speakers documented again and again how a massive cover-up that began immediately after the president’s death has continued despite a unanimous congressional vote in 1992 on the so-called “JFK Act” that required release of all relevant documents by a deadline of last October, writes Andrew Kreig, author of this column and a moderator of the conference.

The Commission and its supporters claim that Lee Harvey Oswald was a lone assassin who killed Kennedy by shooting three shots from the president’s rear during a motorcade through downtown Dallas.

Wecht, the  eminent forensic pathologist, author and former coroner portrayed above right in a file photo by Noel St. John at the National Press Club, showed that extensive scientific evidence as well as common sense indicate that Oswald (shown in a passport photo at left) could not have fired the fatal shot — and so there must have been a conspiracy.

“What the hell is the problem?” Wecht said of efforts by the CIA and other federal officials to suppress relevant records in violation of the 1992 law. “Just put the goddamn stuff out there!”

Concurring in that view was co-keynoter Roger Stone, the GOP political operative and best-selling author of a book arguing that Kennedy’s successor Lyndon Johnson orchestrated the murder and a cover-up.

Stone (shown in a cable television screenshot), a former White House staffer for four GOP presidents and a longtime friend and advisor to Donald Trump, said he would be urging relevant GOP congressional leaders this month to push for full release this spring of thousands of still-suppressed documents whose release Trump delayed until April 26 pending objections by the CIA and other agencies. That review process was supposed to have been completed by last Oct. 26 under provisions of the 1992 law. 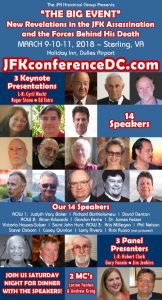 Wecht and Stone kicked off “The Big Event,” a conference organized by the JFK Historical Group and Conscious Community Events in the northern Virginia community of Sterling near the nation’s capital.

The conference title comes from a code phrase used by a few conspirators to describe their goal of killing a president whom some hated for his policies, according to previously released evidence. That evidence includes nearly four million pages of declassified documents, more than 2,500 books and countless witnesses, still-living or previously interviewed.

David Denton, a history professor at Olney Central College in Illinois and a leader of the historical group, worked with co-keynoter Ed Tatro (shown below left) and Lorien Fenton of Conscious Community Events to assemble experts whose research and/or personal experience helps expose what they described as shocking and solid evidence of conspiracy.

Researcher Larry Rivera outlined the schedule for release of remaining JFK research documents outlined by President Trump last October when he failed to comply with the JFK Act requiring release by last October 26 of all JFK Assassination-related documents unless authorities specify in writing why each document is in the national interest to withhold. Trump required all agencies to state by March 26 any reasons why specific documents should be withheld and he promised final decisions by April 26. 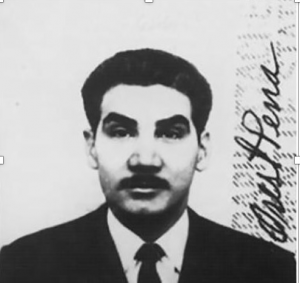 Rivera also spoke about a JFK-related document that discussed FBI informant Orestes Peña. In a House Select Committee on Assassinations interview in a 1978, Peña (shown at left) gave sworn testimony that he was an FBI informant and was frequently in the presence of government agents in New Orleans.

Peña would claim that Oswald himself was also an FBI informant and that FBI Agent Warren C. de Brueys was his handler and would ultimately follow Oswald to New Orleans. After the assassination, according to Peña, de Brueys threatened to “get rid of my ass” if he (Peña) talked.

In the JFK files recently released, Denton noted also that a document outlining Operation Mongoose indicated that the CIA was operating a secret interrogation and debriefing center in Madrid, Spain, that was overseen by the high-level CIA executive William Harvey.

Among the most powerful speakers at the conference were those who described first-person experiences with history-making family members or events, such as President Kennedy’s honor guard, that have prompted them to publish book-length accounts.

Thus TrineDay publisher Robert Kris Millegan described how — as the son of a disillusioned, high-ranking CIA officer — he has gone on to publish more than a hundred books on alternative topics like the assassinations of John Kennedy (JFK), his brother Robert (RFK) and the Rev. Martin Luther King, Jr. (MLK) to provide a forum for researchers and whistleblowers largely ignored by a mainstream media controlled by the same secretive and malign institutions whose operatives killed the three greatest progressive leaders of the last five decades.

St. John Hunt, son of high-level CIA spies E. Howard Hunt (shown in congressional testimony regarding his role in Watergate) and Dorothy Hunt, urged the audience to reflect that a culture of lies he observed in his father’s work, colleagues and employer can destroy families, not just governments.

As chronicled in his heartfelt memoir Dorothy, Hunt said he believed that his mother, 52, was murdered along with 45 fellow passengers by sabotage on their 1972 flight approaching landing in Chicago to prevent her from telling the public what she knew about the Watergate burglary involving her husband.

CBS News reporter Michele Clarke, 29, was killed also in the wreck, whose investigation raises still-lingering suspicions that a cover-up obscured a major crime. The younger Hunt described also his oft-painful relationship with his father, who was imprisoned because of the Watergate burglary, resulting in destruction of family life for the motherless younger Hunt and his siblings.  .

Clark (an African-American man shown at center with the white hat in the adjoining book cover), became a New York City police detective and investigator for the United Nations. He told how his memoir’s title reflected his disillusionment after he discovered compelling evidence that top military authorities apparently fooled him and his colleagues as they sought to transport the president’s body from Andrews Air Force Base to Bethesda Naval Hospital on the date of his death, Nov. 22, 1963.

Researcher Casey J. Quinlan amplified that theme in his talk “Grave Injustice: Fabricating the Autopsy of President Kennedy and Institutionalizing its Cover Up,” arguing that authorities apparently used two different coffins so that Kennedy’s wounds could be manipulated before the official autopsy.

In supporting the recollections of Clark and others on the scene, Quinlan drew heavily from an authoritative five-volume study Inside the Assassination Records Review Board by Douglas P. Horne, chief analyst for military records for the board appointed by Congress. 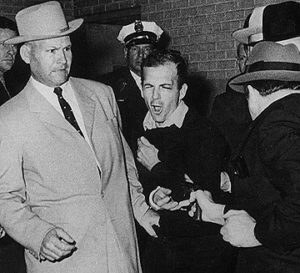 Researcher Brian Edwards told the audience of a statement James Odell Estes made to the FBI in 1977, a year before his death. Estes, who worked for a period of time in Jack Ruby’s Carousel Club, stated that he saw Lee Harvey Oswald there.

In addition, Estes told investigators that he observed Ruby (shown in the adjoining photo shooting Oswald) also meeting with Texas Governor John Connally at the club during the summer of 1963, several months before the assassination.

Judyth Vary Baker, author of three books on Oswald (most recently Kennedy and Oswald), argued that two “different” Oswalds were spotted in Mexico City in the weeks before the assassination, apparently because of a desire to create confusion.

Her theory of intentional confusion meshed with the conference lecture by researcher Steve Osborn, who demonstrated how covert operations (such as the Kennedy assassination in his view) are facilitated by use of look-alikes to confuse witnesses and legitimate law enforcers alike.

Separately, author Phil Nelson previewed his forthcoming book Who Really Killed Martin Luther King, Jr.: The Case Against Lyndon Baines Johnson and J. Edgar Hoover, which is timed for April 17 publication to coincide roughly with the assassination 50 years ago on April 4.

“The assassinations of John F. Kennedy, his brother Robert F. Kennedy and Martin Luther King Jr.,” Nelson said, “were not unrelated.” He said, for example, that all three killings were blamed on loners — even though substantial evidence exists of much wider plotting.

Other researchers are invited to draw on the findings of the researchers and contribute to the ongoing search for truth and justice. Further details are available via the conference website: http://jfkconferencedc.com/.

It will announce availability of a film of the conference proceedings by prize-winning film maker Randolph Benson, a CAPA board member, who screened also at the conference his documentary “The Searchers” those valiantly exposing the truth about what many still regard as The Crime of the Century. 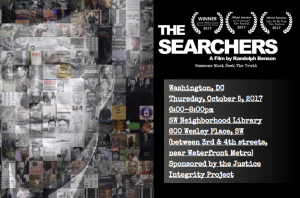 An evocative poster for the film’s premiere in Washington, DC, shown at left (albeit with details too small to discern here), reconstructs Kennedy’s image from a mosaic of the faces of the near countless numbers of witnesses and researchers who have searched for the truth about his murder — and, most independent researchers would argue — have found it.

This column, originally published by the Justice Integrity Project, marks the 49th segment in a series published in coordination with CAPA “A Readers Guide to the JFK Assassination.”

Coming soon here: A Preview of the Wecht Institute’s major conferencefrom  May 2-4 in Pittsburgh

Of Kennedys and Kings

Reinvestigating the RFK and MLK Assassinations at 50

A three-day national symposium reinvestigating the assassinations of Senator Robert F. Kennedy and the Rev. Martin Luther King Jr. on the occasion of the upcoming 50th anniversaries of those history-altering events will be held from May 2-4 at Duquesne University.

The conference organized by the university-affiliated Cyril H. Wecht Institute for Forensic Science will feature the noted forensic pathologist Dr. Wecht along with many other experts on the assassinations.

Registration is open via this link here.