New from The Black Vault

[Courtesy of The Black Vault: A detailed listing of JFK assassination related documents still being withheld. In the words of an experienced FOIA attorney, “Nearly 23,000 withheld assassination related documents represents 63.88% of the approximately 36,000 withheld records comprising the yet to be released JFK database, and raises questions relating to how many records there were to begin with. It seems most likely that the numbers represented in this important list published by the Black Vault refer to some documents which have never been released at all and many documents which have been only partially released. Among the 442,606 pages there are then many which have not yet been released in their entirety.”] 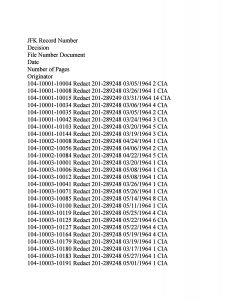 This “withheld” list was released via the FOIA to The Black Vault in FOIA Case #NARA-NGC-2018-000072. It contains, as of January 29, 2018, the entire list of withheld documents by NARA regarding the JFK Assassination.

According to NARA: “We conducted a search and were able to locate an EXCEL spreadsheet that lists everything that has not been released since December 15th, 2017 (the last release date). We are releasing this document if full with no redactions. The spreadsheet lists the JFK record number, the decision, the file number, document date, number of pages, and the origination agency.”

VISIT THE BLACK VAULT TO DOWNLOAD THE PDF FILE