On the Fourth of July, 2017, The Searchers — The Story of Researchers of the Assassination of President John F. Kennedy — will be released worldwide on Amazon Video Direct and Vimeo On Demand.

John Kelin, author of Praise From A Future Generation, called The Searchers, “An invaluable addition to a little-known but critically important story.” 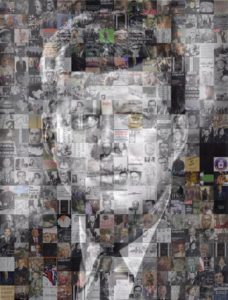 The film’s poster is at left. Kennedy’s image is recreated using a collage of portraits of heroic and persistent researchers. They have persevered through the decades to reveal the facts to the public about an unspeakable murder and cover-up that still haunts the world — and provides instruction about current times to those who dare look at the hidden history.

Robert Groden, a former U.S. House photo analyst and consultant to Oliver Stone’s iconic 1991 film JFK, described Benson’s work as “One of the most important films ever done on the case.”

Groden was the photo lab technician who in 1969 copied the suppressed amateur film of the 1963 assassination shot by Abraham Zapruder at Dealey Plaza. Time Life, Inc. snapped up rights to the photo but only used stills in its works seen by the public.

Groden courageously delivered his pirated Zapruder film copy to ABC-TV news personality Geraldo Rivera so that Rivera could show it on TV in 1975 to the public for the first time. Groden is shown below right in a Justice Integrity Project photo selling his most recent book near by the murder site in Dealey Plaza in Dallas,

His efforts played a major role in debunking conventional wisdom fostered by the Warren Commission and complicit media like the CIA-allied Time Life management. They wanted the public to believe that Kennedy’s head moved forward at the moment of impact with the fatal bullet, and not backward as suggested by the film.

CAPA and allied investigators speak out often about this research and the important work of Benson.

Benson is shown below left (photo by Noel St. John) speaking at a March 16 forum at the National Press Club in Washington, DC organized by Citizens Against Political Assassination (CAPA) during the news industry’s Sunshine Week. Benson filmed those proceedings, thereby continuing his long term commitment to transparency and whistleblowing. 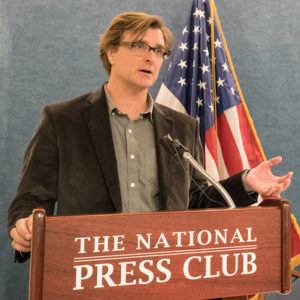 Fourteen years in the making, The Searchers uses never-before-seen interviews, archival footage and recently declassified documents to chronicle the past and present of these ordinary citizens and their contributions to revealing the truth about the crime of the 20th century: the assassination of President John F. Kennedy.

The film’s website has information about the film, the release, and upcoming screenings: TheSearchersFilm.com.

“Suffering ridicule, and being labeled with the intellectual scarlet letter of conspiracy theorists,” The Searchers news announcement said of the citizen activists who refused to accept propaganda, “these individuals have challenged the institutions of power for over 50 years. They have fought against great odds to, as they often proclaim, “take back our history!”

Unbeknownst to most Americans, 2017 is an important year in the Kennedy case.

October 26 of this year is the deadline for all documents related to the JFK assassination to be released by congressional order.

To date, over 6.5 million pages have been released under the JFK Records Act of 1992, however thousands of documents have been withheld or redacted in full, and the CIA has refused to release an estimated 50,000 pages.

Director/Producer Randolph Benson’s work has garnered numerous awards, most notably an Oscar for Best Student Documentary at the Academy of Motion Picture Arts and Sciences’ Academy Awards. His work has been featured at film festivals and broadcast channels around the world.