The inspirational words and actions of Robert F. Kennedy came alive once more during a book lecture this month by his eldest child, Kathleen Kennedy Townsend.

She and biographer Richard “Rick” Allen drew from Allen’s RFK: His Words For Our Times, a 480-page book republished last year. They provided on April 10 at the National Press Club a compelling and entertaining discussion of why the senator exemplified leadership qualities of enduring value to the public, according to this report by CAPA member Andrew Kreig.

RFK, who launched his presidential campaign in March during the war-torn year of 1968 in a challenge to the Democratic incumbent President Lyndon B. Johnson, faced a stressed and angry electorate comparable to those of today, the speakers told their audience in Washington, DC.

His memorable method included appeals to the public’s better nature along with a daring and at times courageous willingness to travel to opposition locales. “RFK had a predisposition to go into 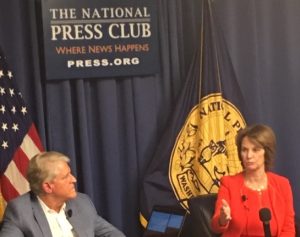 hostile crowds,” said Allen, a media executive and longtime political aide (shown with Townsend). “He constantly sought opportunities to wade into crowds that were not friendly.”

Townsend, a professor at Georgetown Law Center and a former lieutenant governor of Maryland, shared several examples of how such actions won over crowds. One such time was in 1966 when Kennedy accepted an invitation to speak at the University of Mississippi Law School. Kennedy, by then a U.S. senator representing New York, had been enormously unpopular in Mississippi and the rest of the Deep South three years previously as Attorney General under his brother John’s presidency by leading the Justice Department’s legal efforts to require integration and African-American voting rights efforts in compliance with federal court orders.

Huge public opposition resulted in just a narrow 5-4 vote by the university’s regents to permit the RFK speech to occur. The senator arrived with his wife, Ethel, holding hands, which surprised some onlookers who had come to think of him as an almost inhuman devil for trying to change the settled ways of segregation and voting restrictions.

The result by the end of the discussions at the school, the daughter recalled, was a 10-minute standing ovation from the audience. “It was his view that if you talk honestly,” she recalled, “you can make a difference.”

The RFK book, originally published in 1992 to commemorate the 25th anniversary of the senator’s
fatal shooting in 1968 in Los Angeles just after he won California’s Democratic presidential primary, collects his major speeches. They began with his brief years as a journalist and his 1950s work as a U.S. Senate committee counsel helping senators lead hard-hitting investigations of Mafia members and their and allies who ran major labor unions in corruption fashion..

Most of RFK’s words in the book are from his years as attorney general, senator and presidential candidate, with the goal of providing an intimate view of a wordsmith who achieved an enduring reputation for speaking persuasively to unify audiences even on such inherently divisive themes as war, peace, poverty and inequality.

“He was able to win over people,” Townsend said, “not by criticizing them but by asking what kind of nation they wanted to have.”

She and Allen explained also RFK had a rare quality of holding seemingly contradictory ideas and acting on them in a positive way. One example was what they called “aggressive civility.” 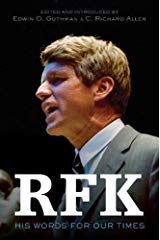 Another was “substantive celebrity,” which Townsend described as using the Kennedy family’s undoubted celebrity during the 1960s to try to achieve solid results in public policy.

“It was not power for power’s sake,” Allen  said, “but to help those Americans who needed representation.”

Among Townsend’s introductions to this world of politics, she recalled, was her attendance at organized crime hearings in the 1950s at the age of three and four. One of her father’s targets was Frank Costello, whom Allen described as the head of the Genovese Mafia Family in New York and a known killer of at least five persons, while some said it was more than double that.

Allen, who edited the book with Guthman, RFK’s former press secretary at the Justice Department, recalled that RFK remained undaunted even after hearing that his Senate’s work had prompted a threat that acid would be thrown in the eyes of his children to teach a lesson.

Townsend’s mother would often take her to hearings instead of to a playground, said Allen (shown

below at left in a photo by the Justice Integrity Project).

“We learned early on,” Townsend added, “that life was tough.”

As another lesson, she said, her father once returned from a trip to the Mississippi Delta to tell his children that he had seen some entire families living in homes only as big as their large kitchen at Hickory Hill in suburban Virginia, and that some of the children had bellies swollen from malnutrition.

“Do you know how lucky you are?” she recalled him saying after one such trip. “You have a responsibility. You have to do something for our country.”

Kennedy was using the media, Allen said, to accompany him on trips such hidden poverty centers as the Mississippi Delta, Native American reservations and migrant worker camps. “He wanted America to see what he saw,” added Townsend. The book is illustrated with photos and has a companion website with containing videos of memorable talks.

A major theme of the book and lecture is that such words and lessons are applicable today. Thus, the book opens with introductory essays on that theme by former Presidents Barack Obama and Bill Clinton, plus five Nobel Peace Prize laureates, two Pulitzer Prize winners (including conservative Peggy Noonan, the principle speech writer for President Ronald Reagan), and others.

The talk concluded with a question-and-answer segment, with highlights excerpted in a news account shown below.

One matter that arose in conversation at a reception before the lecture but not during it was that Townsend and her brother Robert F. Kennedy Jr. were two of the family members of four prominent assassination victims during the 1960s to announce earlier this year that they support new official investigations of the slain leaders — Robert Kennedy, his brother John Kennedy, the Rev. Martin Luther King, Jr. and Malcolm X — because of compelling evidence challenging official accounts of their deaths.

This editor (Andrew Kreig) and my guest, author Jefferson Morley, were two of the five dozen other signatories to the petition, which has led to formation of a Truth and Reconciliation Committee modelled on a similar movement created in South Africa after the apartheid era.

The purpose? To establish truths, in both instances, without undertaking the necessarily controversial step of seeking prosecutions. The committee’s website is here. The Justice Integrity Project, cooperation with CAPA, maintains here a continually updated “Readers Guide to the RFK Assassination” referencing significant books and films illustrating all major points of view.

RFK’s life and powerful legacy was the focus of the book and lecture, understandably enough. The book’s publisher, the HarperCollins imprint William Morrow, maintains a website with video clips of major speeches. 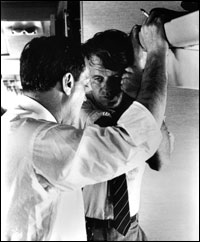 These include Kennedy’s announcement on the evening of April 4 to a horrified crowd in the heart of the Indianapolis ghetto that Dr. Martin Luther King Jr. had been assassinated earlier that day in Memphis. In the adjoining photo, Kennedy (at right) is shown in an iconic photo by Lawrence Schiller (via Getty Images) conferring about the news on the airplane ride to Indianapolis earlier in the day with Frank Mankiewicz, his press secretary from 1966 on.

Local authorities had advised Kennedy even before the shooting that his campaign speech’s locale might be too dangerous. Kennedy ignored the advice and stood on the rear of a flatbed truck to tell the nighttime crowd the news.

“For those of you who are black,” Kennedy said, ” and are tempted to be filled with hatred and distrust at the injustice of such an act, against all white people, I can only say that I feel in my own heart the same kind of feeling. I had a member of my family killed, but he was killed by a white man. But we have to make an effort in the United States, we have to make an effort to understand, to go beyond these rather difficult times.”

“My own favorite poet was Aeschylus,” Kennedy continued. “He wrote: ‘In our sleep, pain which cannot forget falls drop by drop upon the heart until, in our own despair, against our will, comes wisdom through the awful grace of God.'”

Kennedy was a unique white public official in America able to address a crowd in a black neighborhood that tragic night and not encounter violence. He spoke as a recognized champion of the disadvantaged, and he carried the credibility of his family’s tragedy; in fact, this night marked the first time he had referred publicly to his brother’s shooting.

Whether Kennedy’s appearance was a factor — and it seemed surely to have been — Indianapolis remained quiet while rioting broke out in 110 cities across the land, causing thirty-nine deaths, twenty-six hundred injuries, and tens of millions of dollars of property damage.

Those of us associated with CAPA and related research projects attend many book launches and other lectures. This one was exceptionally useful, thought-provoking and otherwise worthwhile in addressing, as advertised, RFK’s “words for our times.”

This column was originally published by the Justice Integrity Project, a non-partisan investigative reporting organization based in Washington, DC.