Famed attorney, noted author, and human rights advocate Dr. William F. Pepper announced July 17 that he is filing a petition to the Organization of American States (OAS) seeking justice for his imprisoned client Sirhan B. Sirhan.

The filing describes Sirhan (shown upon his arrest) as wrongfully convicted of the 1968 assassination of Pepper’s friend, Robert F. Kennedy, the late New York U.S. senator and Democratic presidential candidate. Pepper presents his evidence and arguments at a 10 a.m. news conference on July 20 at the National Press Club, located at 529 14th St., NW, Washington, DC.

Seeking a new trial for Sirhan or an evidentiary hearing, Pepper’s petition against the U.S. government is being filed on July 19, 2017 with the Inter-American Commission on Human Rights (IACHR), an OAS body. The filing alleges that the California and U.S. justice systems violated Sirhan’s right to a fair trial, as required under the OAS Declaration of the Rights and Duties of Man. By treaty, the IACHR may review U.S. cases and those from 34 other nations when domestic remedies have been exhausted.

“Among the many abuses that I have discovered,” said Pepper, “the petition describes how Sirhan’s late defense counsel, Grant Cooper, was compromised by a secretly pending felony indictment. It posed a major conflict that deprived Sirhan of effective counsel. Cooper conducted no independent investigation. He explicitly accepted his client’s guilt and the state’s case without real challenge.”

“According to many witnesses,” Pepper continued, “additional shots were fired by a second assailant during the attack on June 5, 1968 after Kennedy won California’s Democratic primary for that year’s presidential race.” 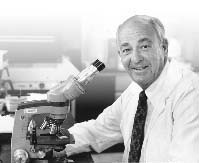 Among those supporting the petition are Paul Schrade, an RFK friend who was shot by Sirhan, and the noted forensic pathologist Cyril H. Wecht, M.D., J.D., shown at right in a file photo in his lab and as amplified in an announcement today below.

Wecht, a consultant, widely published author, and medical school professor, numbers among his professional leadership posts many medical and civic groups, including chairmanship of Citizens Against Political Assassinations (CAPA), a co-sponsor of the news conference and petition, as is the Justice Integrity Project. 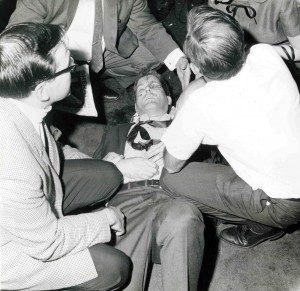 Schrade (shown being revived at the scene in Los Angeles after being shot by Sirhan in the head) unsuccessfully begged a California parole commission in February 2016 to free Sirhan as innocent of killing Kennedy.

Dr. Thomas Noguchi, the then-Los Angeles County medical examiner (shown at right), is among those who have cited evidence that Kennedy was killed from behind. Sirhan was in front of the senator firing shots, one of which hit Schrade in the forehead.

Schrade’s reaction to the parole board’s summary denial of parole for Sirhan, 73, last year is shown below in an Associated Press pool photo of the hearing, from which other photographers were barred.

Sirhan became eligible for release on parole in the early 1980s because he has been a model prisoner according to virtually every account. But California authorities denied parole last year. That meant that Sirhan, now 73, will not be eligible again for review for four more years.

The Justice Integrity Project will post on its website the petition and sample expert statements, and is introducing Pepper both at the news conference and at a dinner at the press club the previous evening, beginning at 6:30 p.m. The public is welcome to attend the lecture and optional “Dutch Treat” dinner organized by the McClendon Group speaker society. Details are reported here: RFK, MLK Friend To Speak July 19 In DC About Media Flaws, Failures.

Dr. William F. Pepper is an American lawyer and English barrister. A 1960s friend of Robert F. Kennedy and the Rev. Dr. Martin Luther King, Jr., he believes that both of their accused killers were wrongly accused for political reasons. His books include the acclaimed The Plot To Kill King (2016), third in a series on the King assassination. It contains the evidence that Pepper first presented in a civil trial in Memphis in 1999. He won that trial, which exonerated James Earl Ray.

Pepper was Kennedy’s Westchester County campaign chairman in the 1964 U.S. Senate race and became convinced of Sirhan’s innocence in 2007. In a separate event at the National Press Club on July 19, Pepper signs books and speaks at 7 p.m. about democratic values before the Sarah McClendon speaker society (chaired by the late newswoman’s former colleague John Edward Hurley), preceded by an optional “Dutch treat” dinner. The public is welcome.

About the Justice Integrity Project, Citizens Against Political Assassinations, and The Indicter

The Justice Integrity Project (www.justice-integrity.org) reports about suppressed news. Its editor Andrew Kreig will introduce Dr. Pepper. Kreig is a volunteer board member for two other event co-sponsors: Citizens Against Political Assassinations (CAPA) (www.capa-us.org) and The Indicter (http://theindicter.com), a Europe-based human rights magazine for which Kreig serves as an associate editor. ## 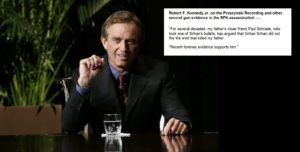 I strongly endorse and support the petition that Attorney William Pepper is submitting to the Organization of American States seeking a new trial for Sirhan Sirhan, who was convicted for the 1968 killing of Senator Robert F. Kennedy.

As an official consultant in forensic pathology to Dr. Thomas Noguchi (shown at left), the Los Angeles Chief Medical Examiner who performed the autopsy on Senator Kennedy, I had the opportunity to visit the shooting scene at the Ambassador Hotel and subsequently review and analyze all the relevant forensic scientific evidence and investigative findings in this matter.

Based upon all the objective, indisputable physical and forensic evidence, there can be no doubt that Sirhan did not fire the bullet that caused Senator Kennedy’s death.  That shot was proven to have been fired from a distance of approximately one to one and a half inches from Kennedy’s head with a forward trajectory.  None of the eye-witnesses ever placed Sirhan in such a position as to have been able to fire that shot.  (The official published post-mortem protocol unequivocally sets forth these facts.)

Incredibly, these unchallenged forensic findings were never elicited at trial.  For whatever reason, Sirhan’s defense attorney, Grant Cooper, never retained forensic pathology and criminalist-ballistics experts to present these scientific facts, nor did he ever ask Dr. Noguchi about these findings in his cross-examination.

Various physical investigative findings, eye-witness statements, and acoustics analyses have further buttressed and corroborated the fact that a second shooter was responsible for Senator Kennedy’s death.

The truth regarding the murder of Senator Robert F. Kennedy needs to be uncovered, and justice for Sirhan Sirhan demands to be achieved.

About Citizens Against Political Assassinations (CAPA)

Based in Washington, DC, CAPA is a non-partisan group that researches and reports on suspected political assassinations in the United States and around the world. CAPA is a co-sponsor of the July 20 news conference at the National Press Club featuring Dr. William F. Pepper, attorney for Sirhan B. Sirhan. Sirhan is shown at right in a 2016 photo by the California Department of Corrections. He is being held in a facility near San Diego.

Details of the materials provided at the press conference will be on the CAPA website (www.capa-us.org), with reporting also by co-sponsors at the Justice Integrity Project (www.justice-integrity.org) and The Indicter (http://theindicter.com), a Europe-based human rights magazine. Additional supporting groups for the petition include Swedish Doctors for Human Rights.

For extensive supplementary materials on this story, visit the Justice Integrity Project and the appendix to this column: Petition To OAS: Sirhan wrongfully convicted in 1968 RFK Murder, July 17, 2017.