To help researchers of President John F. Kennedy’s 1963 assassination and its current implications,  a Reader’s Guide below provides a cross-section of books and videos, along with relevant research archives and commentary.

Some columns, particularly No. 17 in the first list below, catalog significant books arguing all viewpoints. Other columns provide analysis. 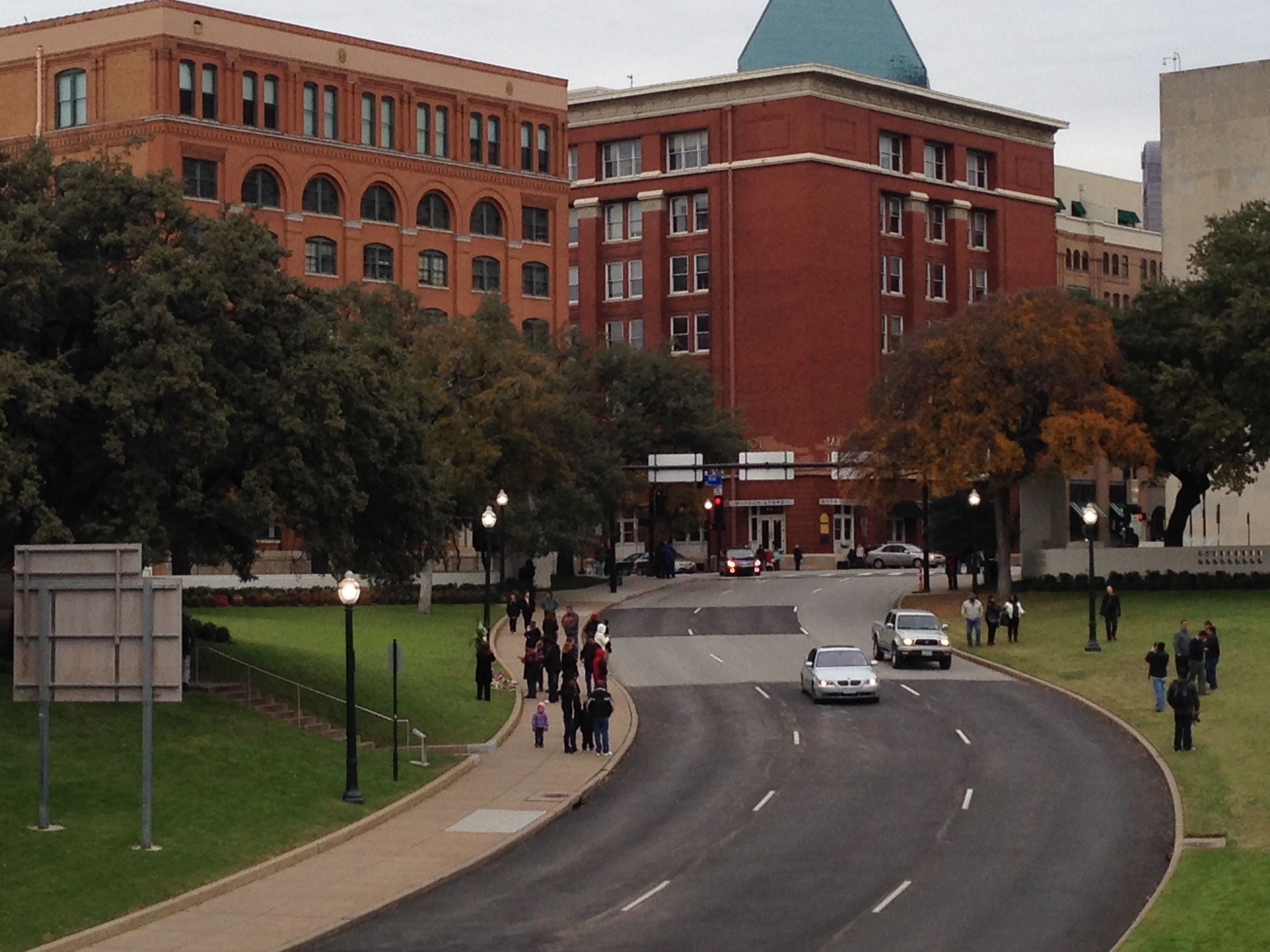 Research inputs are welcome, including suggested additions. Similar initiatives are planned to help illuminate other major assassinations and attempted assassinations of great controversy and historical importance.

The specifics of President Kennedy’s life, death and legacy hold a rare fascination for the public as a guide to today’s current events and official reports.

The JFK assassination has generated more than two thousand books in whole or part. More than three million pages of relevant government have been declassified thanks to countless researchers. Public opinion polls for decades have revealed a rare if not unique disconnect whereby between 60 and more than 75 percent of those polled typically say they do not believe the 1964 report by the blue-ribbon Warren Commission.

Above right is a Justice Integrity Project photo showing Dealey Plaza, where Kennedy was killed on Nov. 22, 1963. The Texas Book Depository Building where accused assassin Lee Harvey Oswald worked is behind the row of trees. The car in the center lane is near the location of the president’s limo at the time of the fatal shot.

Dozens of witnesses, mostly ignored by authorities, reported hearing shooting from the so-called “Grassy Knoll” at the photo’s left. Not visible is a tall, opaque picket fence obscured by the road sign at the far left.

Many researchers — but not the Warren Commission — have argued that at least one shooter hid behind the picket fence and escaped via the near-empty railroad yard behind the fence.

The “X” painted on the highway marks the approximate spot where Kennedy was hit by the fatal shot. JFK researcher, author and photo expert Robert J. Groden repeatedly repaints the spot, to the dismay of Dallas authorities, as a reminder of continuing citizen concern. Groden had been hired as a photo technician to work after the assassination on the then-suppressed amateur video that photographer Abraham Zapruder shot of the killing from a site on the Grassy Knoll. Groden played a key role in delivering a pirated copy to ABC-TV for its first public showing in 1975, helping ramp up questions by many observers.

The materials below derive from the efforts of countless other concerned citizens and whistleblowers. They compiled records and in some cases challenged conventional wisdom, often at risk to their reputations and careers and with scant possibility of any reward except in hope of helping solve an enduring civic mystery.

Andrew Kreig, the author of the series excerpted above, is a non-profit executive, investigative reporter, author and attorney based in Washington, DC.

After careers in journalism, law and business, he became a founding director of both the Justice Integrity Project and of CAPA, among other leadership positions in civic organizations. CAPA (Citizens Against Political Assassinations) membership details and volunteer opportunities are here.

Other Analysis By CAPA Leaders

Peter Dale Scott, shown in a file photo and a member of CAPA’s Advisory Board, is the retired University of California professor and poet who popularized the terms “Deep State” and “Deep Politics” beginning with a series of books exploring President Kennedy’s assassination and its ripple effects on American life continuing to the present. Details of his career are here.

In 2015, the investigative site WhoWhatWhy excerpted his new book Dallas ’63: The First Deep State Revolt Against the White House  (Open Road Media, September, 2015). The CIA, Mafia, Mexico — and Oswald is Part 1 of a six-part series of book excerpts, published from Nov. 22-27, 2015.

WhoWhatWhy Founder and Editor Russ Baker, himself the best-selling author of Family of Secrets about the Bush dynasty, wrote this introduction to Scott’s series:

When John F. Kennedy was assassinated on November 22, 1963, the United States lost more than its president. It lost its innocence. The subsequent investigations into the young president’s killing raised more questions than they answered — and caused Americans to lose faith in their government. Indeed, for many people in the U.S. and across the world, the assassination marked the point at which their fundamental perceptions changed. Just after the Warren Commission released its report on the assassination, the level of public trust in government was at 77 percent. A decade later it had plummeted to less than half that (36 percent).

Kennedy’s death and the circumstances surrounding it gave birth to a movement. This movement, composed of all kinds of people, is dedicated to investigating the story behind the story, to exposing the power networks hidden beneath surface events. These machinations have been dubbed “Deep Politics.” Those who study it believe there is much more to national and world events than what the public is told by government officials and evening newscasters — and, as you will see, Peter Dale Scott proves it. On the occasion of the anniversary of Kennedy’s assassination, WhoWhatWhy is pleased to present excerpts from Chapter 2 of Scott’s latest work: Dallas ’63: The First Deep State Revolt Against the White House.

Bill Simpich’s Series: “The The Twelve Who Built the Oswald Legend.”

San Francisco attorney and prominent JFK Assassination researcher Bill Simpich (shown in a file photo) has published on OpEdNews a 12-part series on “The Twelve Who Built the Oswald Legend.” The series began in 2010 with: The JFK Case: The Twelve Who Built the Oswald Legend (Part One: Mother, Meyer, and the Spotters). Simpich is a founding member of CAPA’s board of directors, and author of the 2103 book State Secret: Wiretapping in Mexico City, Double Agents, and the Framing of Lee Oswald (Mary Ferrell Foundation, 2013). 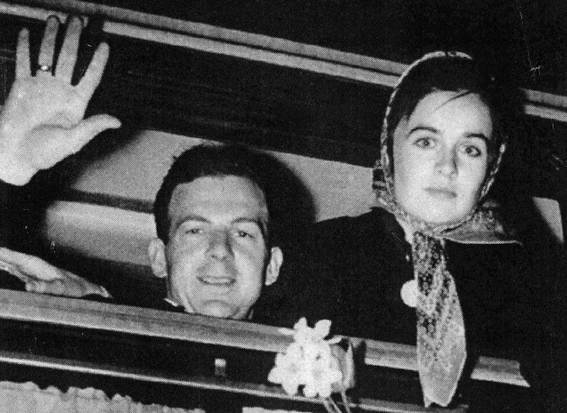 A photo of the Oswalds embarking for the United States is drawn from the National Archives.

The first part of the series is excerpted immediately below. Additional segments are listed below that, with dates of publication at left.

OpEd News, The JFK Case: The Twelve Who Built the Oswald Legend (Part One: Mother, Meyer, and the Spotters), Bill Simpich, Aug. 22. 2010. With millions of documents released in the years since the JFK Act was passed in the nineties, the intelligence backgrounds of the twelve who built the Oswald legend have come into focus. A “legend maker” can range from a “babysitter” who just keeps an eye on the subject to someone handing out unequivocal orders. I count twelve of them, and tell you about them in this series of essays here.

For further information, the Justice Integrity Project has published a continuously updated list of major books about the JFK assassination as part of its Readers Guide series: “JFK Readers Guide: Assassination Books, Reports.” Reader inputs are welcome, of course.