“Young people are still being taught that the 35th president was murdered by a lone gunman, and that is simply bulls-t” Wecht boomed during an interview at his modest office in downtown Pittsburgh last month.

Nearly 60 years ago, the commission concluded that Oswald killed Kennedy because he was a disaffected, profoundly maladjusted loner with communist sympathies. But Wecht still believes the shooter may have been a hired gun committing murder for the CIA.

Oswald “had almost certainly been a CIA agent of some kind,” says Wecht, but the directive to kill may have come from higher up. Allen Dulles, director of the CIA from 1953 to 1961, had overseen the disastrous Bay of Pigs invasion to oust Cuban dictator Fidel Castro and had reason to be disgruntled. Dulles also ended up in prime position to participate in a coverup, Wecht conjectured.

“Kennedy had fired Allen Dulles because he was really pissed off about what the CIA was doing,” said Wecht. “Then who gets appointed to the Warren Commission? Dulles. It stinks to high heaven.”

Tanned, vigorous and dressed sharply in a black jacket and red necktie, Wecht said he wrote his book now for the sake of the truth – and his advancing age.

Wecht claims Kennedy was shot twice in the head — from the back and the front — which would necessitate two gunmen. 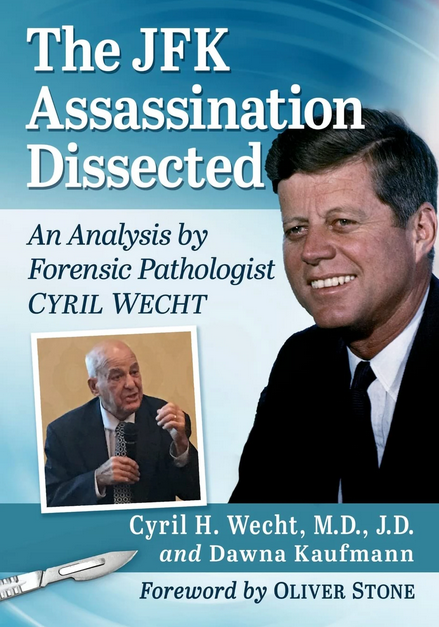 “I don’t intend to live forever, just for a long time,” said Wecht, who has a wife, Sigrid Wecht, and four children. “I felt I wanted to lay out all the things I’ve experienced and done and the people I’ve met, and it was time. I’ve been working on the book for six years.”

The former coroner of Allegheny County, Pa., Wecht is both a trained lawyer and doctor who has conducted more than 17,000 autopsies and also provided expert testimony on high-profile cases including the deaths of Robert F. Kennedy, Martin Luther King Jr., Elvis Presley, JonBenet Ramsey and Laci Peterson.

The first non-governmental forensic pathologist to gain access to the National Archives to examine the assassination materials in 1972, Wecht discovered and exposed the ghastly fact that the 35th president’s brain had vanished.

“As we sit and talk today, the president’s brain remains missing. Unaccounted for,” he said.

Lee Harvey Oswald, a trained marksman, easily returned to the US from the USSR with a high-ranking KGB officer’s niece as a wife — raising questions about his “friends in high places.”

Interest in the assassination — and speculation about a conspiracy — has simmered for decades, gaining steam after Oliver Stone’s 1991 movie “JFK” disputed the belief that Oswald acted alone. (Wecht consulted on Stone’s film and dedicated a chapter to his experience on the movie set. Stone, in turn, wrote the book’s foreword).

In 1992, after a public outcry, Congress passed the JFK Assassination Records Collection Act requiring release of all JFK assassination files by 2017. The deadline has come and gone with US presidents citing national security concerns. Biden has scheduled release of the final documents for December 2022.

Wecht is dubious that all the relevant documents will be released but predicts that if they are, it could be revelatory. “There might be something supporting more than one gunman, evidence of witness manipulation, or failure to call key witnesses,” he said.

In the decades since the assassination, most Americans have continued to believe that Oswald did not act alone. In 1976, one year after the public release of the Zapruder film, a 1963 home movie made by Dallas clothier Abraham Zapruder capturing the moment JFK was shot, 81 percent said they believed more than one gunman was involved.

Wecht’s book contains never-before published details of his meetings with Oswald’s widow, Marina, who, although unhappily married to Oswald, validated her husband’s claim that he was “just a patsy,” as well as of Wecht’s meeting with George de Mohrenschildt, a shadowy CIA-connected figure who befriended the Oswalds prior to the assassination and, before committing suicide himself in 1977, corroborated Marina’s assessment of Oswald as a fall guy.

The book describes the defection of Oswald, a trained marksman, Marine, and fluent Russian speaker, to the USSR for two-and-a-half years, and his trouble-free return to the US with bride Marina, niece of a high-ranking KGB officer, at the height of the Cold War. (The implication is that Oswald had friends in high places).

After a 10-month investigation, the Warren Commission concluded that Oswald fired three times. One shot missed, another hit Kennedy in the back, and the third hit him in the head. Rather than explain the sequence of the hits, the commission presented three slightly different scenarios but each scenario ended with the conclusion that just one gunman killed the president.

In 1978, Wecht, as a member of the forensic pathology panel assembled by the House Select Committee on Assassinations (HSCA), testified in favor of a second gunman. He was the lone dissenter.

“I really stood alone,” he said.

For one, the gunshot wound in Kennedy’s back — which the Warren Commission said had an upward trajectory — couldn’t have been caused by Oswald as the sole assassin firing from above, Wecht said.

“Under the single bullet theory, Oswald is the sole assassin, he’s firing from the sixth-floor window of the Texas School Book Depository building, so the bullet is moving from up, downward, right? So how the hell could it go upward?”

He also recounts that the chief medical examiner for the Dallas Coroner’s office, Dr. Earl Rose, whose office was located at Parkland Memorial Hospital in Dallas where JFK received treatment and died, was manhandled by the Secret Service to prevent him from conducting the autopsy.

“The agent . . . put his arms under Rose’s armpits, lifted him into the air, and set him down gently against a wall. It wasn’t an action designed to hurt Dr. Rose but to show him who was boss,” Wecht writes.

“They swore, they put Dr. Rose up against the wall,” he added.

Instead, JFK’s corpse was flown to Washington, DC, where an autopsy was done by two physicians, neither of whom was board certified in forensic pathology, and neither of whom “had ever done a gunshot wound autopsy in their entire careers,” he said.

The autopsy materials, “including clothing, X-rays, bullet,” “amazingly, belonged to Jacqueline Kennedy,” who donated them to the National Archives in Washington, DC, with the proviso that nobody could see those effects for 75 years, except that after five years, a “recognized expert in the field of pathology with a serious historic purpose” could apply to examine them, Wecht said.

Wecht fought to fill that slot and was given permission to conduct the probe in 1972. That’s when he discovered that JFK’s brain, despite being listed in the inventory of assassination materials, was “no longer available.”

Wecht writes that Lyndon Johnson ordered the exterior of Kennedy’s limo washed before it could be investigated.

“If they had dissected the brain, they would’ve seen there were two bullets that hit Kennedy in the brain, one from the rear, and one from the front,” said Wecht. His theory that the president was hit in the head twice is “based on witness testimony, the Zapruder film, and medical evidence.”

Critics argue that professionals like Wecht questioning the Warren Commission’s findings have contributed to a general erosion of trust in authority and spawned an industry of conspiracy-theorizing, prompting potentially harmful doubts about everything from vaccines to elections.

“I am amused by the audacity and hypocrisy of people calling me a conspiratorialist,” he said. “I have always had a majority of Americans on my side. How many things are there that maintain a majority consensus?

“Go back and talk with older people, before Watergate and Vietnam,” he says. “Pretty much what the government said, that was it, you did not question.

“We are still learning things the government covered up.”