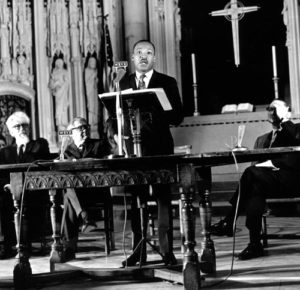 Fifty years ago today, Martin Luther King addressed the moral bankruptcy of the Vietnam war and the untenable costs to society of rampant U.S. militarism. Entering the final year of his life, his “Beyond Vietnam” address at New York City’s Riverside Church moved Dr. King into a profoundly deeper exploration of experiments with truth akin to those that defined Mohandas Gandhi’s life.

Knowing beforehand he was progressing further across a one-way boundary, Martin King proceeded to grow far, far beyond the romanticized and frozen-in-1963 persona of a civil rights icon. In “King and the Cross,” Jim Douglass points out how, “With that speech that drew a prophetic line between real peace and our national security state, King went beyond his own security net as a civil rights leader [and] became a national security threat.”

See also: New York Times, When Martin Luther King Came Out Against Vietnam, David J. Garrow, April 4, 2017. David J. Garrow is the author of “Bearing the Cross: Martin Luther King Jr. and the Southern Christian Leadership Conference” and the forthcoming “Rising Star: The Making of Barack Obama.” Fifty years ago today — and one year to the day before his assassination — the Rev. Dr. Martin Luther King Jr. delivered the most politically charged speech of his life at Riverside Church in Upper Manhattan. It was a blistering attack on the government’s conduct of the Vietnam War that, among other things, compared American tactics to those of the Nazis during World War II.

The speech drew widespread condemnation from across the political spectrum, including from this newspaper. Other civil rights leaders, who supported the war and sought to retain President Lyndon B. Johnson as a political ally, distanced themselves from Dr. King.  Dr. King’s Riverside Church address exemplified how, throughout his final 18 months of life, he repeatedly rejected the sunny optimism of his 1963 “I Have a Dream” speech and instead mourned how that dream had “turned into a nightmare.” But the speech also highlighted how for Dr. King, civil rights was never a discrete problem in American society, and that racism went hand in hand with the fellow evils of poverty and militarism that kept the country from living up to its ideals. Beyond signaling his growing radicalism, the Riverside speech reflected Dr. King’s increasing political courage — and shows why, half a century later, he remains a pivotal figure in American history.